During a recent graph review meeting, our Master Coach and Internal Coach at Loess Hills decided that it would be beneficial for our 1st graders to switch to the Blending Words intervention which combines the conjunction aspect of Phoneme Blending/Segmenting with the visualization of the words on the page. Many of my 1st graders had repeatedly tried to peek into my packet while we were practicing and it seemed to aid in their understanding of how the sounds correlated to the letters and how those letter sounds blended into a word.

The following progress monitoring assessments confirmed that Blending Words was a more successful intervention for nearly all of the students, and one of my students made an unbelievable jump. Mark* is a 1st grader who took a long time to warm up to me, often half-listening or staring into space during our sessions. After a few weeks, he began to open up socially but his scores and understanding of letter sounds remained lower than expected. However, after switching to the Blending Words intervention, Mark’s score went from 16 sounds the previous week to 58 sounds. The visualization of the letter accompanied with the blending format helped to reestablish his understanding of letter sounds, and though I knew he had been doing well in the
intervention since the switch, I had no idea that he would accomplish so much.

I explained to Mark that his progress was downright astounding and that I was beyond proud. I gave him a ticket (a motivational reward used in the PBIS program at Loess Hills) and told him to tell his teacher how wonderfully he'd performed on his test. He looked at me, bewildered by what I was trying to tell him, but I think receiving the ticket got the point across. I’m looking forward to the next progress monitoring to see if he can repeat his previous performance, or perhaps (fingers crossed!) improve upon it.

"Smile While You Read"

At the beginning of the year, I began working with a first grade student who still had not mastered letter sounds. This placed her farther behind the rest of her first graders peers I was tutoring through Reading Corps. However, after just a few weeks in Reading Corps, she had mastered her letter sounds and my coaches and I decided to move her on to word blending. For several weeks, I attempted to help her master the concept of putting sounds together to make words. Success still eluded us. We tried putting words together using cubes from another tutoring intervention, giving her words with only stop sounds or only continuous letter sounds and many other strategies to help her blend words, but all to no avail.

After my internal coach made the suggestion to present the student with paper slips with only one word written on them at a time, I asked my internal coach to observe one of our tutoring sessions. Then, like she had the skill mastered the whole time, the first grader began reading the entire words to me, without even needing to first sound out the letters in the word. Whether it was shyness, an overwhelming amount of new content that needed time to be fully processed or my internal coach is some kind of magician, I am still unsure. Now the first grader is caught up with the rest of her peers and is well on her way to exiting the Reading Corps tutoring program.

Posted by Unknown at 1:16 PM No comments:

"Can We Read Another One?"

The first student I take early in the morning, John*, has never been very excited to read. Although he is actually one of my best readers, he lacks a lot of confidence and reads quietly, slurring his words a little bit as if he doesn't care if they’re right or wrong. He never sounds enthused and often asks if he can stay in daycare instead of practicing his reading skills with me because he feels like he’s missing out on fun opportunities. Sometimes I feel like the bad guy for not letting him have time to run around or to watch a movie with other kids, but I know that what we’re doing will benefit him a lot more in the long run.

However, last week he started to get really excited about the passages we were reading. He really connected with them and was interested in what he was reading. Since his comprehension was kicking in, he even made fewer reading errors, sometimes making none at all for a whole section. The passage that interested him the most was one about garter snakes. He was excited because he had seen and caught one in real life and wanted to know more about them.

At the end of the twenty minutes, I was about to mark where we had left off on the garter snake story so we could pick up there the next day, but as soon as I reached for my pen he said, “Can we read another one?” It was so fantastic to know that he’s really starting to care about what we’re doing and enjoy reading as an activity. I let him read another section and he left smiling and feeling confident. I have high hopes that he’ll continue to grow and achieve now that he understands how much fun reading can be.

*Name has been changed to protect student confidentiality.

My first great story not only focuses upon the growth for one of my kindergarten students with letter sounds, but also touches upon my own, personal growth. I start each day by walking to one of our kindergarten classrooms. Anna* sees me at the door, smiles and runs toward me. We talk on our way to my room and then she sits right down to work on her intervention. She listens intently to the instructions and then we get right to work with letter sounds. She works through the five, letter-sound flash cards and as we substitute two new letters, she has a huge smile on her face. When I first tested Anna's knowledge of letter sounds, she recorded a score of 0. However, she is now able to identify 17 letter sounds and I am proud of how far she has come in the short time that we have been doing the interventions. I knew when I became an AmeriCorps member that this would be a rewarding experience, but I could not have imagined the personal growth that I have experienced in one short month. This experience is incredible and I can’t wait for each school day to begin.

I am also blessed to be at Neil Armstrong with a returning Internal Coach who gives me encouragement every day. Even though she is very busy, she takes time to check-in and answer any questions that I might have on a given day. Neil Armstrong is a very caring community and I have learned so much from everyone at the school. Just watching the interactions between teachers and students has been rewarding and has helped me strengthen my own interactions with students. There have been some challenges, but we have worked through them as a team. I am excited to be a small part of this team and an AmeriCorps member.

*Name has been changed to ensure confidentiality.

Posted by Unknown at 8:37 AM No comments:


Organization Summary: Reading Corps envisions that all children will become successful readers by the end of 3rd grade. Reading Corps does this by training and coaching AmeriCorps members, trained as Elementary Literacy Tutors, who provide evidence-based reading interventions for at-risk K-3 students, using formative assessment to guide decision-making, and incorporating school-based and external coaching for support.

Position Summary:  The K-3 Master Coach is the external coach that provides technical supervision and coaching support to a specific set of schools participating in Reading Corps to support implementation and ensure fidelity to the Reading Corps model. Master Coaches support schools in utilizing a data-based decision making model to ensure Reading Corps students are making progress. Specific schools that will be supported by the Master Coach will be available within the next few weeks.

Please pass along this opportunity to anyone you know who might be interested in joining our fantastic team!
Posted by Unknown at 12:38 PM No comments:

As research continues to confirm the benefits of utilizing summer learning programs to help close the achievement gap for disadvantaged youth and overcome learning loss for all students, Iowa Reading Corps is partnering with local United Ways to utilize the people-power of AmeriCorps to ensure more Iowa students have access to the educational and nutritional supports that they need to succeed.

While Iowa's 10, full-time Reading Corps AmeriCorps Members wrapped up the school-based portion of their terms of service in May and June, they are continuing to serve their communities through summer tutoring, enrichment, and/or feeding programs in June and July. In partnership with local United Ways, members are collaborating with community volunteers to provide more opportunities for children and youth to receive access to summer enrichment and literacy activities while also receiving a nutritious meal. By combining access to educational and nutritional supports, local United Ways and school districts are paving the path to closing the educational gap that often widens for disadvantaged youth over the summer months.

While the positive impact of Iowa Reading Corps AmeriCorps Members is targeted upon literacy tutoring provided during the school year, we're proud to highlight the impact that members are having in their communities throughout the summer months. Summer programming would not be made possible without the support of local United Ways who also provide match funding for members' living stipends. What an exciting opportunity to continue strengthening the bridges between school and community!
Posted by MelissaSimmermaker at 9:42 AM No comments:

Today is the last day of school. Reflecting back to the beginning of the school year, I remember sitting in the Reading Corps Training Institute last September and feeling nervous about mastering a set of tutoring interventions. Fast forward nine months, and I cannot express how much I have learned and all the experience that I have been afforded as an Iowa Reading Corps AmeriCorps member. With end-of-year field trips and assessments, the past month has provided some hurdles for ensuring that students were able to meet with me each day to receive their Reading Corps tutoring.

Now that I have worked my way through the "bubble kids" at my school who are just below grade level in reading, I'm now able to tutor the students who are a little farther below grade level. It is taking a little longer for these students to reach grade level and exit from the program, but we know that this is normal. After deciding to serve a second term of service with Reading Corps, I'll be able to just pick back up in the fall with these students and get them off and running with tutoring. I find myself repeating this statement over and over again, but I cannot express how much this position means to me. I have thanked our principal at Washington as often as possible for giving me this opportunity and I am very excited to be back here again next year.
Posted by Unknown at 12:45 PM No comments: 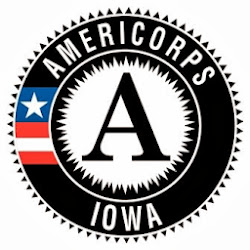